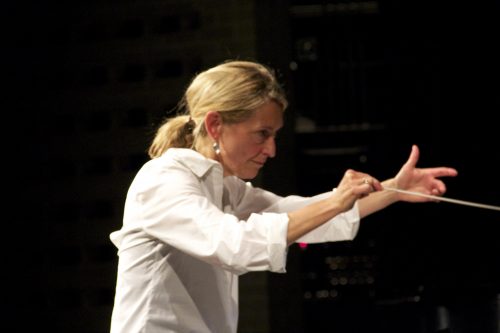 Nicole Paiement has gained an international reputation as a conductor of contemporary music and opera. Her numerous recordings include many world premiere works.

Ms. Paiement is a very active guest conductor. In 2019, she made her debut at Lyric Opera of Chicago with Heggie’s Dead Man Walking, as well as performances with the Washington National Opera, The Glimmerglass Festival (2016 – 2018) and a debut at Seattle Opera with Mason Bates’ The (R)evolution of Steve Jobs. Other prior engagements include Talbot’s Everest with Lyric Opera of Kansas City, Puts’ Silent Night at The Atlanta Opera and Washington National Opera for the world premiere of Mohammed Fairouz’s The Dictator’s Wife. In 2019 Paiement also conducted the world premiere of Jake Heggie’s If I Were You with Merola Opera Program, San Francisco.

Mo. Paiement made her debut at L’Opéra de Montréal with the Canadian premiere of Benjamin’s Written on Skin in January 2020 and with the Fort Worth Symphony Orchestra in November 2020. Upcoming engagements include her UK premiere in November 2022 with the English National Opera. Paiement will return to the UK in June 2023 to conduct Talbot’s Everest with the BBC Symphony at the Barbican Center, London. Mo. Paiement will also return to the Dallas Opera in April 2022 to conduct Bizet’s The Pearl Fishers and to L’Opéra de Montréal in Season 22/23.

Paiement has served as the Artistic Director of the BluePrint Project at the San Francisco Conservatory of Music (SFCM) where she has commissioned, premiered, and recorded works from many living American composers. At SFCM, she holds the Jean and Josette Deleage Distinguished Chair in New Music. Paiement previously served as the Director of Ensembles at the University of California – Santa Cruz (UCSC), where she was awarded the UCSC Eminent Professor Award in 2014. She received the Edward A. Dickson Emeritus Professorship in 2015 in recognition of her outstanding contributions and achievement in artistic scholarship and teaching.

Paiement was awarded American Composer’s Forum’s “Champion of New Music Award” for her outstanding contributions to contemporary music in 2016. In addition to being a leader in the world of contemporary opera, Ms. Paiement is also a specialist in early 20th Century French music and regularly conducts music from the Baroque and Classical repertoire.