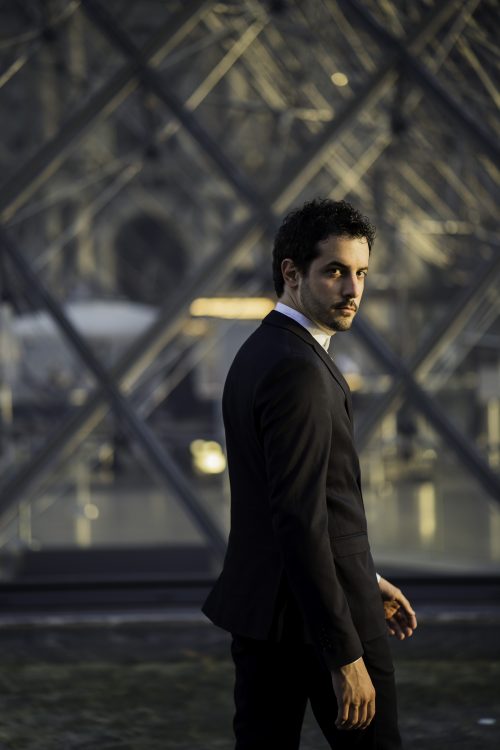 Born in Morbegno (Sondrio) in 1991, Lorenzo Passerini graduated with honors in trombone at the Conservatoire in Como in 2009. In 2014 he got a second-level academic diploma at the Conservatoire in Aosta with honors. As a trombonist, he went on tours around the whole world under the direction of conductors like John Axelrod, Andrey Boreyko, Fabio Luisi and Riccardo Muti.

Lorenzo’s career as a conductor began in December 2011, conducting the Orchestra Antonio Vivaldi, which was created by him with composer Piergiorgio Ratti. He has been the artistic and musical director of the Orchestra Antonio Vivaldi since its creation. Since 2017 he has been the artistic director of the Symphonic Season of the Teatro Sociale in Sondrio and of the Association “Amici della Musica” in Sondalo. With the OAV he conducts more than ten symphonic productions every year. His most ambitious project was a tour in China in January 2020, where the Orchestra performed in six Chinese cities, under the guidance of its musical director. Some pieces by Piergiorgio Ratti, Antonio Eros Negri, Andrea Battistoni and Andrea Portera were dedicated to and performed for the first time by Lorenzo Passerini.

In 2016 he made his debut as guest conductor of the Orchestra ICO della Magna Grecia and the Orchestra Regionale Filarmonia Veneta, for the occasion of the XXVIII international opera singing contest “Iris Adami Corradetti”.

Since 2015 he has collaborated with Maestro Nicola Luisotti for opera productions in the most famous theaters in Europe: Royal Opera House in London, Teatro Real in Madrid and Teatro alla Scala in Milan. In Autumn 2018 Lorenzo was Maestro Luisotti’s assistant conductor in the production of Puccini’s Turandot at the Teatro Real in Madrid. That same year he  conducted once again the Orchestra della Fondazione Arena di Verona, Orchestra di Padova e del Veneto, Orchestra Sinfonica Metropolitana di Bari and the DITTO Orchestra in the tour in South Korea with soprano Sumi Jo.

In 2019/20 he conducted the State Symphony Orchestra “Novaya Rossiya” at Moscow’s Tchaikovsky Hall with soprano Nadine Sierra, Ravello Festival’s Concerto all’Alba with the Salerno Symphony Orchestra, Tosca at the Teatro Regio in Turin replacing Daniel Oren, Carl Orff’s Carmina Burana at the National Opera in Warsaw and a Gala concert with tenor Francesco Demuro at the Teatro dell’Opera in Sassari and finished the season at the Sydney Opera House conducting Charles Gounod’s Faust.

2020/21 season began for Lorenzo Passerini at the Teatro Real in Madrid with the opera Un ballo in maschera, where he shared the stage with Nicola Luisotti; he led the Orchestra Filarmonica Toscanini in Parma, and appeared in Genoa with the Carlo Felice Theatre Orchestra. Lorenzo conducted Prokofiev’s Pierino e il Lupo with the Orchestra Sinfonica Siciliana, made his debut at the Theatre of Las Palmas in Gran Canaria with Rossini’s La Cenerentola, and conducted Aida at the Sydney Opera House.

The last 2021/22 season opened for Maestro Passerini at the Zagabria National Theatre with Puccini’s La Rondine and Gala concert with the world acclaimed soprano Pretty Yende at the Theatre de Champes Elysée in Paris. He returned to the orchestra pit of the Sydney Opera House for Puccini’s La Boheme, and made his debut at the Teatro San Carlo di Napoli with Bellini’s La Sonnambula together with Jessica Pratt and Francesco Demuro. Another house debut marked his conductiong debut with Giordano’s Fedora at the Frankfurt Opera House, at the Opéra Royal de Wallonie for a Gala with soprano Nadine Sierra, at the Konzerthaus Dortmund for a Gala with soprano Nadine Sierra and tenor Xabier Anduaga, for Rossini’s Il Barbiere di Siviglia at the Essen Opera House. At the Savonlinna Opera Festival Lorenzo conducted Puccini’s Tosca with Matthew Polenzani and Ludovic Tezier in the cast for which he was highly acclaimed by audiences and critics alike. He finished past season with a Gala performance together with soprano Pretty Yende at the Turku Festival in Finland.

This season Maestro Passerini begins with Puccini’s La Bohème at the Théâtre du Capitole in Toulouse and the Köln Opera House. He will make his conducting debut with Verdi’s Rigoletto in Teatro San Carlo di Napoli, Massenet’s Norma at the Teatro Massimo di Palermo and Donizetti’s Lucia di Lammermoor at the Opera Las Palmas. He will return to the National Opera in Warsaw for Carl Orff’s Carmina Burana.