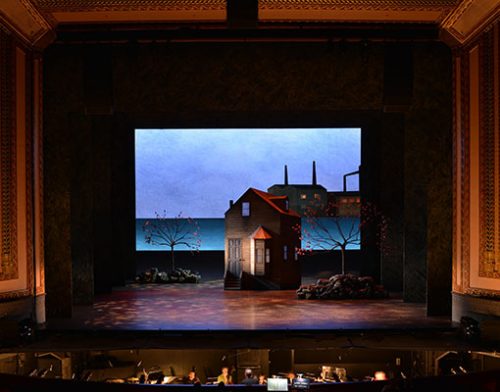 Internationally acclaimed artist Paolo Ventura (b. 1968) is a master of the staged narrative, bringing the great theatrics and drama of the world to light in his moody photographic tableaux. Although the final product of his complex, multi-disciplinary practice is always a photograph—a dreamy, surreal hybrid between fact and fiction, the present day and the past—his process features many steps, and his realization of any given idea involves various stages of development and progression. He always begins, however, by imagining a story, which he illustrates through water-color drawings. He then draws the narrative into three dimensions by building a set—initially in miniature for his earliest series, using antiques and vintage props he procured at flea markets, and populating the scenes with small figural maquettes—and then translating it back into two dimensions through the flash of his camera.

Ventura was raised by a celebrated Italian children’s book illustrator, and throughout his youth, his father would delight him and his brother with fanciful sketches and bed-time stories. That sense of childlike wonder pervades all of his work, which often features images of street performers, theaters, and cinemas, evoking the fanciful compositions of Toulouse-Lautrec. But Ventura’s work is also imbued with a sense of disquiet that is all the more jarring for the superficially playful nature of his subjects, perhaps reflecting his unease about our changing, increasingly technological world.
His narratives are tinged with nostalgia for a bygone era, and they evoke simpler moments from Italy’s past—the faded-pink stucco buildings, the cobblestone streets—but with a dark twist. Pre- or post-war, they are populated by shadowy, suspicious figures in hats and trench coats. In one photograph, a man stands on the edge of a roof, looking down toward a silent city swirling with mist; in another, a crowd of passerby lift their faces to the sky to watch a tight-rope walker, glimpsed exiting the top corner of the frame, suggesting an ominous end; in a third, a clown in a harlequin costume with a pale, white face lies on a bed, his hands clasped over his chest—but whether he is dead or asleep is unclear.

After completing his first three series War Souvenir, Winter Stories and The Automaton, Ventura decided to take part in the worlds he created. He began using himself as an actor rather than the inanimate figurines, photographing himself, and then digitally manipulating himself into his constructed backgrounds. Recently, his work has evolved yet again, and the appeal of incorporating live actors into his whimsical narratives has prompted him to initiate a new suite of photographs called Short Stories. For these works, he has brought his love for theatre to the forefront, constructing life-sized sets into which he can physically insert himself as well as members of his family, casting his son, wife, and twin brother as actors in a realm that formerly existed exclusively in his mind. The unsettling disjuncture in his photographs, however, remains: he may have built a world of realistic proportions, but it is just a painted backdrop.

Born and raised in Milan, Italy, Paolo Ventura graduated from the Academia di Belle Arti di Brera in Milan in 1991. His work has been exhibited internationally, including at Forma International Center for Photography, Milan, Rencontres de la Photographie, Arles, and Maison Europeenne de la Photographie, Paris, and in 2012, he was selected by curator Vittorio Sgarbi to create a series of works for the Italian national pavilion at the 54th Venice Biennale. His works have been acquired by prominent public collections including the Museum of Fine Arts in Boston, the Library of Congress in Washington D.C. and the Martin Margulies Collection in Miami, Florida. Four monographs of his work have been published: War Souvenir (Contrasto, 2006), Winter Stories (Aperture and Contrasto, 2009), The Automaton (Peliti Asociati, 2011) and Lo Zuavo Scomparso (Punctum Press, 2012), Short Stories (Aperture, 2016).