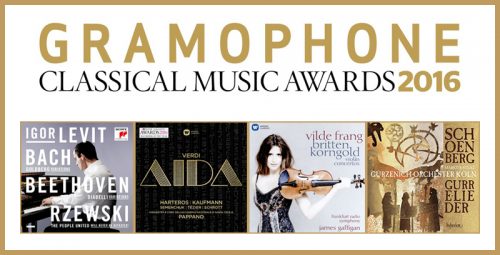 Pappano, Levit, Gaffigan, Jovanovich and Semenchuk Triumph at 2016 Gramophone Awards
IMG Artists is thrilled to congratulate James Gaffigan, Brandon Jovanovich, Igor Levit, Sir Antonio Pappano and Ekaterina Semenchuk on their 2016 Gramophone Awards.
The Best Recording Awards, announced today, will be presented during a gala celebration at London’s St John’s Smith Square on 15th September. The winners of the other awards (Artist of the Year , Young Artist of the Year, Label of the Year, Lifetime Achievement and the new Special Achievement award), will be revealed throughout the ceremony.
Sir Antonio Pappano’s Warner Classics Recording of Aida, starring Ekaterina Semenchuk as Amneris, is named Opera Recording of the Year. The lauded and internationally best-selling recording also stars Anja Harteros, Jonas Kaufmann, Ludovic Tézier and Erwin Schrott with Pappano conducting the Chorus and Orchestra of the Accademia Nazionale di Santa Cecilia. Gramophone writes, “This would always have been an event, a major (in several senses) studio opera recording. But it’s also a performance absolutely worthy of the attention, and a superb addition to the catalogue,” adding, “The singing of the doomed lovers has tenderness and beauty, and the preternaturally quiet Santa Cecilia string-playing is exquisitely managed as the drama makes its longed-for tryst with silence.”
Igor Levit triumphs in the Instrumental category for his Sony Classical recording of Bach’s Goldberg Variations, Beethoven’s Diabelli Variations and Rzewski’s The People United Will Never Be Defeated.
In their initial review, Gramophone says, “If a finer piano recording comes my way this year I shall be delighted, but frankly also astonished.” They continue, “There is, if you care to rationalise, a Russian depth of sound and eloquence of phrasing, tempered by Germanic intellectual grasp…Levit’s musical personality is as integrated and mature as his technique. And both of these are placed at the service of the music’s glory rather than his own.”
James Gaffigan conducted violinist Vilde Frang and the Frankfurt Radio Symphony Orchestra for the Concerto winner: Britten, Korngold: Violin Concertos. Gramphone writes of the Warner Classics release: “An exciting player, [Frang] prefers taking chances to playing it safe, in spite of which her interpretations feel airily unforced rather than ostentatious. It’s quite a feat and one reliant on supportive collaborators able to unfold a… musical narrative with comparable ease. Fortunately James Gaffigan, whose international career was launched in Frankfurt at the 2004 Sir Georg Solti International Conducting Competition, is with her every step of the way, as is the Frankfurt Radio Symphony Orchestra.”
Tenor Brandon Jovanovich is honoured in the Choral category for the Hyperion recording of Schoenberg’s Gurrelieder.Gramophone writes, “The set shines a new light on this fascinating piece and has a fierce conviction and integrity all its own,” noting the, “excellent performances throughout from orchestra, soloists and choruses – rarely have the lush textures of Schoenberg’s late-Romantic cantata sounded this fresh.” Jovanovich shares the award with Barbara Haveman, Claudia Mahnke, Gerhard Siegel, Thomas Bauer and Johannes Martin Kränzle and the Netherlands Female Youth Choir; Cologne Cathedral Choir, Male Voices and Vocal Ensemble; Chorus of the Bach-Verein, Cologne; Kartäuserkantorei, Cologne; Cologne Gürzenich Orchestra under Markus Stenz.

Congratulations to all of the winners and nominees.