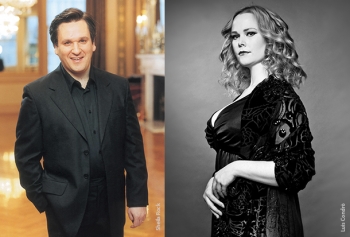 Sir Antonio Pappano and Jessica Pratt have been honoured by the 2016 Stella della Lirica (International Opera Awards). Mo Pappano is named Best Conductor whilst Ms Pratt wins the Best Soprano award.
Now in its fifth year, the “Oscars of the Opera” celebrates the achievements of outstanding singers, conductors and creative teams in association with the Italian Confederation of Associations and Foundations for Music and Lyric Symphony, with support from the Cariverona Foundation. The awards, designed by sculptor Alberto Zucchetta, will be bestowed during a gala celebration and performance on Friday, 23rd September at the Ristori Theatre in Verona.
Music Director of both Royal Opera House, Covent Garden and Rome’s Accademia Nazionale di Santa Cecilia, Sir Antonio Pappano is one of the most sought-after conductors and acclaimed for his charismatic leadership and inspirational performances in both symphonic and operatic repertoire. His recent Warner Classics studio recording of Aida has earned universal praise and numerous international accolades, including the 2016 BBC Music Magazine Album of the Year and Best Opera awards, 2016Gramophone Best Opera Award and the 2016 ECHO Klassik for Conductor of the Year.
Hailed by The New York Times as a soprano of “gleaming sound, free and easy high notes, agile coloratura runs and lyrical grace,” Jessica Pratt is considered one of the foremost interpreters of bel canto’s most challenging repertoire. Since her European debut in 2007, Ms Pratt has earned acclaim and admiration for her performances on many of the world’s most prestigious operatic, festival and concert stages.
Ms Pratt’s forthcoming highlights include her Metropolitan Opera House debut as Queen of the Night; Semiramide, Rosmonda d’Inghilterra and a concert at L’Opera di Firenze ; Rosmonda d’Inghilterra at the Donizetti Festival; Adèle in Le comte Ory at the Konzerthaus Dortmund; Gilda in Rigolettoat Oviedo Opera; Amenaide in Tancredi at the Palau de les Arts Valencia; Marie in La fille du Régiment in Las Palmas and a gala concert in Brisbane. 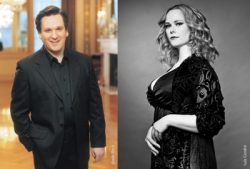