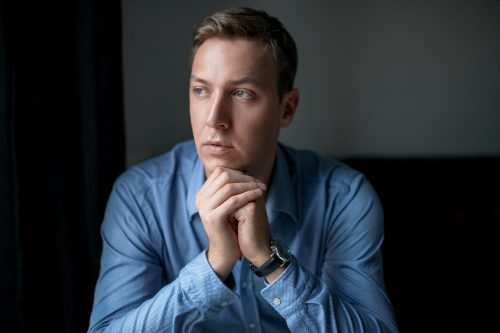 Polish bass Krzysztof Bączyk, born in 1990, received his musical training first as a member of the Poznań Boys Choir. He went on to study at the Academy of Music there, where in 2010 he was honoured as the best student of the year and graduated in 2014. He also attended master-classes held by artists such as Neil Shicoff, Anita Garanča, Andrzej Dobber, Anne Murray and David Pountney. Moreover, he attended Akademia Operowa Young Artists Program at the Polish National Opera in Warsaw and he worked with Izabela Kłosińska and Eytan Pessen.

In December 2010 he was accepted by the Opera Academy of Grand Theater in Poznań, where he was able to build up a broad repertoire, performing in productions such as Shostakovich’s Lady Macbeth of Mtsensk, as Hamlet in the opera by Ambroise Thomas as well as in Aida, Eugene Onegin, Le Nozze di Figaro, Parsifal, Don Giovanni and Der Freischütz.

His participation in the opera workshop of the Academy of the Festival d’Aix-en-Provence in 2012 laid the foundation for intensive cooperation with the festival in the following years.

He returned in 2013 as a participant in the Mozart workshop and was awarded the prize of the friends of the Festival d’Aix-en-Provence. Subsequently he sang Nettuno and Tindaro in a tour production of Francesco Cavalli’s Elena. In 2014 he gave guest performances as the First Priest and Second Armoured Man in The Magic Flute. In 2015 he was highly acclaimed for his interpretation of Melisso in Handel’s Alcina. In January 2016 he debuted at the Polish National Opera in Warsaw as Publio in La Clemenza di Tito and performed in Salzburg with Marc Minkowski in Handel’s Acis and Galatea as Poliphemo.

During the years he debuted in Cagliari as Colline in La Bohème; he sang Commendatore and Masetto (Don Giovanni) in Stockholm, Capellio (I Capuleti e i Montecchi), Melisso (Alcina), Raimondo (Lucia di Lammermoor), Masetto and Colline at Opernhaus Zürich, as well as Mozart’s Requiem at Opéra National de Lorraine. He appeared as Masetto at Aix-en-Provence Festival and at Beaune Festival, and he made his debut at Opéra Bastille in Don Carlos. Additionally, he sang Die Zauberflöte and Zuniga in Carmen at Warsaw Opera, Rossini’s Stabat Mater with Orchestre National du Capitole de Toulouse, Alcina at Théâtre des Champs Elysées, The Fiery Angel at Polish National Opera and at the Aix-en-Provence Festival, as well as Don Giovanni (Masetto) in concert with NDR Philharmonie Hannover.

In the recent seasons, he debuted at ABAO Olbe Bilbao as Colline in La Bohème, in the US in Rossini’s Stabat Mater with the Philadelphia Orchestra and at Arena di Verona in Aida, Carmen and Tosca. He returned to Opéra Bastille in Lady Macbeth of Mtsensk, Tosca and Il Barbiere di Siviglia; he sang Iolanta and a concert version of Il Pirata at Palais Garnier, and he made his house debuts at the Lyric Opera of Chicago in Il Barbiere di Siviglia and at Teatro Real as Masetto in Don Giovanni.

Most recently he made his house debuts at the Glyndebourne Festival in Luisa Miller, at the Royal Opera House and at Opéra de Rouen in Die Zauberflöte, and at the Bolshoi Theatre in Don Giovanni. He also returned to Teatro Real in La bohème, to Opéra de Paris in Don Giovanni and to Festival d’Aix-en-Provence in Norma, and he sang Le nozze di Figaro at Wrocław Opera, as well as Mozart Requiem with Accademia Nazionale di Santa Cecilia.

Season 2022/23 started with I Capuleti e i Montecchi at Opéra de Paris, followed by the house debut with Gran Teatre del Liceu in Il trovatore and concert performances of Le nozze di Figaro with the Boston’s Handel and Haydn Society.