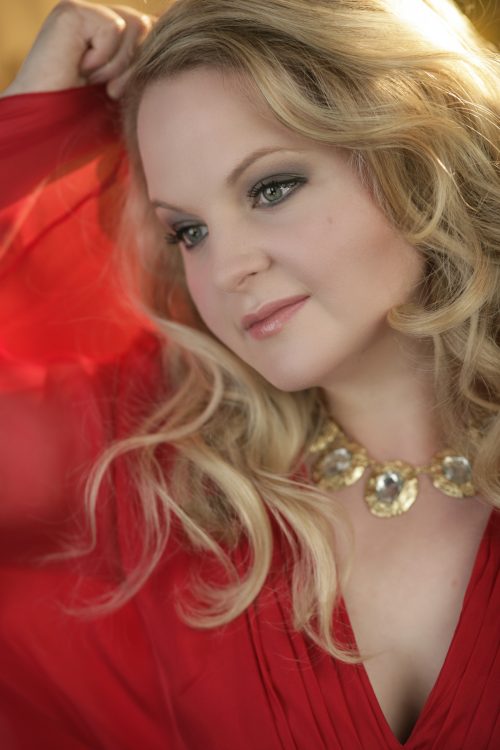 Mezzo-soprano Elizabeth DeShong has developed a reputation as “one of the most intelligent stage performers of her generation (Opera News).” Lauded equally for her musicianship and commanding stage presence, she has established herself as a regular on concert and operatic stages worldwide.

The 2022-2023 season marks DeShong’s return to San Francisco Opera, where she will debut the role of Octavia in the world premiere of John Adams’ Antony and Cleopatra. 2023 includes a tour of Handel’s Alcina (Bradamante) with Les Musiciens du Louvre and Marc Minkowski, followed by her Dallas Opera debut as Dorabella in Mozart’s Così fan tutte. From there, DeShong will make another exciting house and role debut as Fricka in Atlanta Opera’s production of Das Rheingold. The season closes with a return to Amsterdam’s Concertgebouw, where she will rejoin John Adams for a performance of The Death of Klinghoffer.

DeShong began the 2021-2022 season by joining The English Concert and Harry Bicket, as Bradamante (debut), on a tour of Handel’s Alcina. Following the tour, she reprised the role of Calbo in Rossini’s Maometto II with Washington Concert Opera. The season continued with a return to The Metropolitan Opera where she performed her much-lauded portrayal of Suzuki in Puccini’s Madama Butterfly. In June, DeShong made her debut with the Festival de Saint-Denis in Pergolesi’s Stabat Mater. This was followed by a return to London for a recording and performance of Mercadante’s Il proscritto with Opera Rara.

During the 2019/20 season, Ms. DeShong returned to the Metropolitan Opera and the Royal Opera for performances as Suzuki in Madama Butterfly, the latter conducted by Sir Antonio Pappano. She made her debut with the Melbourne Symphony as Hänsel in a concert performance of Hänsel and Gretel and sang Pauline in Pique Dame at Lyric Opera of Chicago — both conducted by Sir Andrew Davis.

Ms. DeShong performed Adalgisa in Norma with the North Carolina Opera, gave a recital for Vocal Arts, D.C., sang John Adams’ The Gospel According to the Other Mary with the Accademia Nazionale di Santa Cecilia with the composer conducting, and was a soloist in Handel’s Messiah with the San Francisco and Houston Symphonies, conducted by Jane Glover. Additional highlights were her debuts with the Los Angeles Philharmonic as Ariel in Sibelius’ The Tempest, the Philadelphia Orchestra in Rossini’s Stabat Mater, conducted by Yannick Nézet -Séguin, a tour of Europe and the United States with The English Concert in which she portrayed both Juno and Ino in Handel’s Semele, the Verdi Requiem with the Minnesota Orchestra, and she also debuted the role of Sesto in a new production of La Clemenza di Tito with the Los Angeles Opera.

In 2018/19, Ms. DeShong sang Ruggiero in Alcina at Washington National Opera, and Arsace in Semiramide at the Metropolitan Opera. In concert she performed Mendelssohn’s Elijah with Music of the Baroque, and made her debut with the Chicago Symphony Orchestra in Schubert’s Mass No. 6, and the world premiere of Three Lisel Mueller Settings by Maxwell Raimi, both conducted by Riccardo Muti. On the European platform, Ms. DeShong portrayed Suzuki in a new production of Madama Butterfly at the Glyndebourne Festival, and made her debuts with the Accademia Nazionale di Santa Cecilia, and at the Proms in Bernstein’s Symphony No. 1 (Jeremiah), under the direction of Sir Antonio Pappano, and sang Hänsel in a concert version of Hänsel and Gretel conducted by Sir Andrew Davis at the Edinburgh International Festival.

Further performances of note include Adalgisa in Norma at the Lyric Opera of Chicago, and her Royal Opera and Bayerische Staatsoper debuts as Suzuki. Ms. DeShong has performed extensively throughout the world with such companies as the Metropolitan Opera, San Francisco Opera, Lyric Opera of Chicago, Los Angeles Opera, Canadian Opera Company, English National Opera, Wiener Staatsoper, Opéra National de Bordeaux, the Glyndebourne Festival, and Aix-en-Provence.

Ms. DeShong was the recipient of the Washington National Opera’s “Artist of the Year” award in 2010, for her performance as the Composer in Richard Strauss’ Ariadne auf Naxos. On DVD, she can be seen as Suzuki in the Royal Opera’s production of Madama Butterfly on Opus Arte, Hermia in the Metropolitan Opera’s pastiche opera The Enchanted Island (Virgin), Suzuki in the Glyndebourne Opera production of Madama Butterfly, and as Maffio Orsini in the San Francisco Opera’s production of Lucrezia Borgia (EuroArts Music and Naxos of America). Her recording of Handel’s Messiah with the Toronto Symphony under the direction of Sir Andrew Davis was released by Chandos and nominated for two Grammy Awards in 2018.