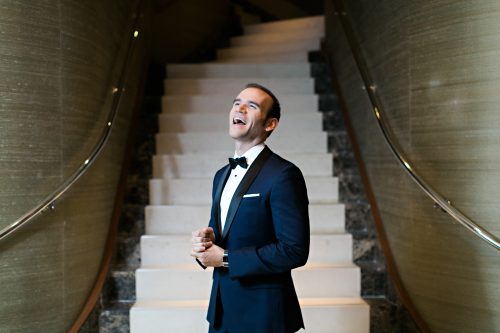 Of Michael Fabiano’s debut as Lensky in Tchaikovsky’s Eugene Onegin at the Royal Opera, The Sunday Times in London wrote: “I can’t think of a Lensky at Covent Garden who has held the audience so spellbound in 40 years of Onegin-going… a glorious debut.” The recipient of the 2014 Beverly Sills Artist Award and the 2014 Richard Tucker Award, Mr. Fabiano is the first singer to win both awards in the same year, and is considered one of the greatest tenors in the world today.

In the summer of 2020, Mr. Fabiano performed Alfredo in La Traviata in concert performances at the Teatro Real, and in a special, streamed concert from Festival Napa Valley.

In the 20/21 season, Mr. Fabiano is scheduled to sing Riccardo in a new production of Un Ballo in Maschera at the Teatro Real, Edgardo in a concert performance of Lucia di Lammermoor at Tchaikovsky Concert Hall in Moscow, Des Grieux in Manon at the Wiener Staatsoper, and Cavaradossi in Tosca at the Opéra Bastille and Teatro Real.

Mr. Fabiano began the 2019/20 season portraying Des Grieux in Massenet’s Manon at the Metropolitan Opera, starred in a season-opening gala for Michigan Opera Theatre entitled An Evening with Michael Fabiano, and assumed the title roles in Don Carlo and Hoffmann, in a new production of Les Contes d’Hoffmann at the Opéra Bastille.

In the summer of 2019 he performed in a recital in Turku, Finland, and in a concert with orchestra for the Theatro Municipal do Rio de Janeiro.

In the 2018/19 season, Mr. Fabiano made his Lyric Opera of Chicago debut as Rodolfo, opening their season in a new production of La Bohème. He returned to the Metropolitan Opera for his role debut as Faust in Boito’s Mefistofele followed by Rodolfo in La Bohème, and portrayed a second incarnation of Faust when he assumed the title role in the Gounod opera at the Royal Opera. He made his role debut as Werther with Opera Australia,and debuted at the Staatsoper Berlin as the Duke in a new production of Rigoletto, which was followed by another role debut when he portrays Carlo VII in Verdi’s Giovanna D’Arco at the Teatro Real. In addition, there were concerts with the Moscow Philharmonic at Tchaikovsky Concert Hall in Moscow, at the Sun Valley Opera, and a special concert for the Dallas Opera: Fabiano, Hymel, and Polenzani, in which Mr. Fabiano performed with his colleagues Bryan Hymel and Matthew Polenzani.
Among Mr. Fabiano’s recent career highlights are his first Don José in Carmen at Festival Aix-en-Provence, the title role in Donizetti’s Poliuto at the Glyndebourne Festival in the first performances of this opera in UK history, Jacopo Foscari in I Due Foscari at the Teatro Real, Alfredo in La Traviata at the Metropolitan Opera and Glyndebourne Festival, Jean in Massenet’s rarely performed Hérodiade and Corrado in Il Corsaro with Washington Concert Opera, and Oronte in I Lombardi  with Opera Orchestra of New York.
Mr. Fabiano has performed at many of the world’s leading opera houses; a list that includes: the Metropolitan Opera, San Francisco Opera, Royal Opera, Opera Australia, Teatro Real, Opéra National de Paris, Dutch National Opera, La Scala, Asociacíon Bilbaina de Amigos de la Ópera, Dresden Semperoper, and Deutsche Oper Berlin. In addition, he has graced concert stages with some of the world’s most acclaimed orchestras such as the Cleveland Orchestra, San Francisco Symphony, Los Angeles Philharmonic, Philadelphia Orchestra, Oslo Philharmonic, and the Vienna Symphony, and has performed a number of major recital and concert tours.
On DVD, Mr. Fabiano can be seen in the title role of Donizetti’s Poliuto and Alfredo in La Traviata, both from the Glyndebourne Festival on Opus Arte, Cassio in Otello from the Metropolitan Opera on Decca, and Gennaro in Donizetti’s Lucrezia Borgia from the San Francisco Opera on EuroArts and Naxos of America.

Mr. Fabiano is the recipient of Australia’s prestigious Helpmann Award in the “Best Male Performance in an Opera” category, for his portrayal of the title role in Gounod’s Faust with Opera Australia. He is a member of the Metropolitan Opera Guild Artists’ Council and one of the founders of ArtSmart, a non-profit organization that provides free voice lessons to students in public schools in under-served neighborhoods within the U.S.