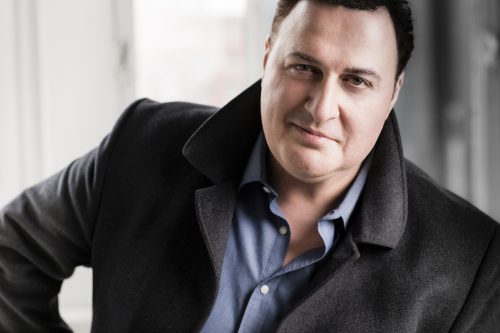 “The Georgian baritone George Gagnidze was an exceptionally menacing Scarpia, singing with robust, earthy power and seductive lyricism when the villain turns on the charm”. With these words the New York Times hailed George Gagnidze in a 2008 performance of Tosca at the New York Avery Fisher Hall. One year later he made his sensational debut at the Metropolitan Opera in New York as Rigoletto, and has since then ranked among the leading singers of his genre.

Regularly invited by the most prestigious international opera companies, scheduled engagements of the 2020/21 season include the title part of Nabucco at the Metropolitan Opera, Iago in Otello with the Dallas Symphony Orchestra and Germont in La traviata at the Teatro San Carlo of Naples. Performances as Amonasro in a new production of Aida at the Metropolitan Opera as well as the title role of Rigoletto at the San Francisco Opera were cancelled due to the Coronavirus crisis.

In the 2019/20 season, the star baritone made his debut at the Royal Opera House Covent Garden as Germont in La traviata, sang the title role of Nabucco at the Deutsche Oper Berlin, Iago in Otello for his debut at the Washington National Opera as well as Scarpia in Tosca at the Teatro San Carlo in Naples, while appearances as Scarpia at the Metropolitan Opera and a gala performance as Iago in Mannheim were cancelled due to the pandemic.

George Gagnidze made his role debut as Michele in Il tabarro at the Metropolitan Opera in the 2018/19 season, marking his 100th Met performance. He also sang his 100th performance as Rigoletto at the MET, performed Germont in La traviata and Iago in Otello at the Paris Opera, Iago at the Deutsche Oper Berlin, his first Sharpless in Madama Butterfly at the Royal Opera House of Muscat and Alfio in Cavalleria rusticana for his debut at the Teatro San Carlo and in open-air performances at the Sassi di Matera, telecast all over Europe.

Other past highlights include Rigoletto, Macbeth, Tosca,, Pagliacci, Cavalleria rusticana, Aida and Hovanščina at the Metropolitan Opera, Nabucco and Tosca at the Vienna State Opera, Rigoletto, La traviata, Tosca and Aida at the Teatro alla Scala, Tosca, Francesca da Rimini and Aida at Opéra National of Paris, Simon Boccanegra and Tosca at the Teatro Real di Madrid, Andrea Chénier and Aida at the San Francisco Opera, Rigoletto at the Festival of Aix-en-Provence, Cavalleria rusticana and Pagliacci at Gran Teatro del Liceu of Barcelona and the Staatsoper Hamburg, Rigoletto and Pagliacci at the Los Angeles Opera, Rigoletto, Andrea Chénier, La Gioconda and Tosca at the Deutsche Oper Berlin, Luisa Miller at the Palau de les Arts Reina Sofia in Valencia, a new production of Nabucco and La traviata at the Arena of Verona, Hovanščina at the BBC Proms in London and Otello at Staatsoper Hamburg, the Greek National Opera of Athens and at the Hollywood Bowl.

Born in Tbilisi and trained at the State Conservatory of his home town, George Gagnidze debuted as Renato in Un ballo in maschera at the Paliashvili State Opera in 1996. He entered the “Concorso Voci Verdiane” in 2005 as an award-winner of the “Leyla Gencer Voice Competition” and the “Elena Obraztsova Competition”. The jury, chaired by José Carreras and Katia Ricciarelli, awarded him first prize for his outstanding vocal interpretation. After launching his international career from Germany, he was soon engaged by many of the world’s important opera houses.

His DVD/Blu-Ray recordings include Tosca from the Metropolitan Opera, Aida from La Scala and Nabucco from the Arena of Verona.