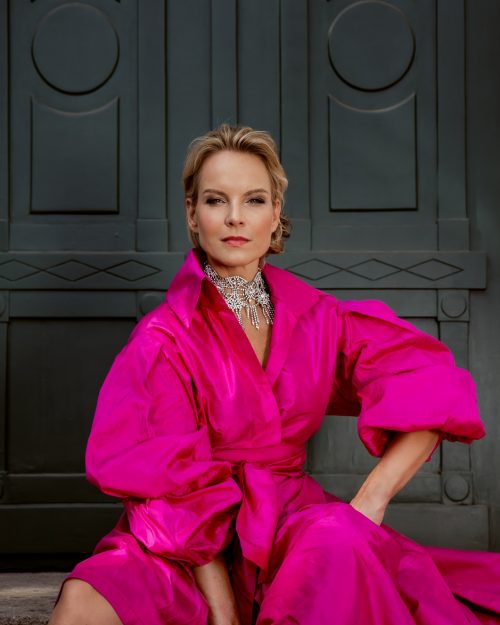 Elīna Garanča was born into a musical family in Riga, Latvia. She began her professional career as a resident artist with the Südthüringischer Staatstheater in Meiningen, followed by the Opera in Frankfurt am Main and Wiener Staatsoper, in each theatre appearing in numerous leading roles.
Since then, Elīna has established herself as one of the music world’s major stars through her performances with leading opera companies and symphony orchestras around the world. She has captured critical and popular acclaim for her beautiful voice, intelligent musicianship, and compelling stage portrayals.
Among other roles, she is particularly famed for her portrayal as Bizet’s Carmen which she has sung in the majority of leading theatres, like Royal Opera House Covent Garden, Bayerische Staatsoper, Palau de les Arts Reina Sofía Valencia, or Metropolitan Opera to critical acclaim; the NY Times named her “the finest Carmen in 25 years…”. The Met Carmen production was broadcasted in more than 1,000 movie theatres worldwide and is one of the most viewed and successful “Live in HD” performances of the Metropolitan Opera.
Recent highlights include a new production of Samson et Dalila at Royal Opera House with Antonio Pappano portraying the role of Dalila, the Europakonzert with the Berliner Philharmoniker under the baton of Kirill Petrenko at the Great Amber Concert Hall Liepāja, Latvia – concert standing in solidarity with Ukraine and for peaceful coexistence in Europe, streamed in over 30 countries live and broadcast in more than 80 countries. During the 2021/22 season Elīna made her role debut as La Principessa di Bouillon in Cilea’s Adriana Lecouvreur at the Wiener Staatsoper. In 2022 will Elīna star at various festivals and galas throughout Europe, America and East Asia.
In September 2005 Elina became an exclusive artist with Deutsche Grammophon (DG). Her first solo recording ‘Aria Cantilena’ was released in March 2007 to great popular and critical acclaim. Two of her previous albums (‘Romantique’ and ‘Meditation’) both won an ECHO Klassik award. Her album ‘Sol y Vida’ was released in May 2019 and has been unanimously praised by the critics: “Garanča’s selection of flamboyant Mediterranean and Latin American songs is a predictably good fit for her ripe and beguiling timbre.” (Gramophone). In November 2020, she released her first solo recital album, featuring Schumann’s song cycle Frauenliebe und Leben and a selection of Brahms songs followed by ‘Live from Salzburg’ album released in December 2021 documenting two remarkable events at the Salzburg Festival in the summers of 2020 and 2021 with the Wiener Philharmoniker and Christian Thielemann.
Elīna has been the recipient of numerous national and international awards, greatly cherishing the title of ‘Kammersängerin’ honoured by the Wiener Staatsoper for her devotion to the House, singing over one hundred and sixty performances of eighteen roles since her debut in the House in 2003.
Elīna appears regularly at the Metropolitan Opera, Wiener Staatsoper, ROH Covent Garden, Salzburg Festival, Festspielhaus Baden-Baden, Bayerisches Staatsoper Munich, Deutsche Oper Berlin, Carnegie Hall New York and Wigmore Hall London and continues to perform in various concerts, festivals and recitals all over the world.