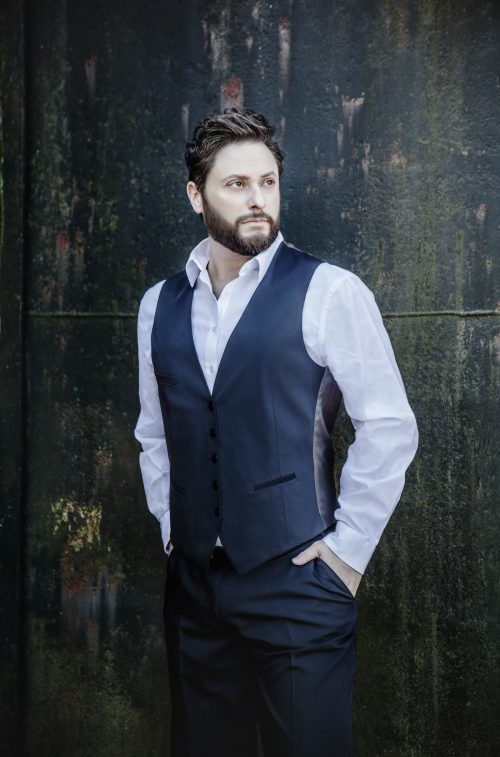 Airam Hernández native of Tenerife – in the Canary Islands has quickly become one of the most promising belcanto tenors of his generation. The uniqueness of his timbre and his highly developed musicality have given him a place of honor among the rising stars in the opera world, since the early start of his career.

Early in 2019 he sang the role of Enrico Caruso in the acclaimed world premiere of Caruso a Cuba at De Nationale Opera of Amsterdam. He also made his successful American debut at the Dallas Opera singing Fenton from Falstaff, conducted by Maestro Riccardo Frizza.

Season 2019/20 will lead Hernández back to the Théâtre du Capitole of Toulouse to debut as Pollione from Norma; also, he will perform at the  Teatro La Fenice singing Alfredo from La Traviata, and later during 2019 he will head to the Teatro Filarmonico de Verona to participate in his long-expected debut as Nemorino from L’elisir d’amore. Airam will return to United States for covering the role of Ferrando in Così fan tutte‘s production of the Metropolitan Opera House of New York. In 2020 he will debut the role of Rodolfo from La Boheme in Menorca; and he will be back in the leading role of Liszt’s Sardanapalo in Budapest, besides performing as Alfredo from La Traviata in Lugano.

In 2008 he initiates a fruitful relationship with the Gran Teatre del Liceu in Barcelona, place where he sang in several productions such as the Erster Gefangener in Fidelio, Ein buckliger Spieler in Prokofiev’s The Gambler, Venditore di canzonette in Il tabarro and Nathanaël in Les contes d’Hoffmann.

During 2014 he was invited to be a member of the International Opera Studio of Zurich Opera House and in 2015, he was asked to join the ensemble of soloists of this opera house. Through this period, he obtained great reviews from critics and the public for his interpretation of five different characters (Le Commissaire, Le Garde, Le Facteur, Le Mécanicien; Le Gardien) in the Zürich premiere of Martinu’s Juliette, conducted by Maestro Fabio Luisi. From season 2015-2016 the reviews highlighted Airam´s executions in different productions occurred at the Opernhaus Zürich such as Falstaff – together with Bryn Terfel as the eponymous anti-hero-, La Traviata, Der fliegende Holländer and Macbeth. During the same season he was invited by Maestro Teodor Currentzis to debut the role of Alfredo in a new production of La Traviata at Perm Opera, directed by Robert Wilson.

The year 2018 Hernández made his debut as Arbace in Idomeneo at the Opernhaus Zürich, conducted by Maestro Giovanni Antonini. Airam during this year made his French debut in the opening season of Théâtre du Capitole of Toulouse singing Alfredo in their new production of La Traviata. Another accomplishment during this year was to sing the leading role in the world premiere on Franz Liszt recently recovered opera Sardanapalo with the Staatskapelle Weimar, conducted by Kirill Karabits. Moreover, a tour of La Traviata took him to the Grand Théâtre de la Ville de Luxembourg, Konzerthaus Dortmund and Elbphilharmonie Hamburg, all dates conducted by Maestro Teodor Currentzis.

Hernández combines opera with symphonic repertoire, lyrical galas and recitals, highlighting his participation in the lyric Gala dedicated to the zarzuela in the Gran Teatro del Liceo and the Auditorium of Zaragoza, next to Maestro Placido Domingo and the soprano Ana María Martínez, conducted by Maestro Ramón Tebar. Airam together with the soprano Jessica Pratt and Maestro Antonello Allemandi participated in a Gala at the Teatro Regio Parma. He performed in Beethoven’s 9th Symphony with maestro Nicola Luisotti at the Christmas Concert at the Auditorio Nacional de Madrid; also he acted at the Misa Criolla directed by Maestro Omer Meier Wellber in the Semperoper Dresden; in addition to his performance in Mozart’s Requiem in D minor, conducted by Rani Calderón at the Opéra National de Lorraine. Airam performed in Mendelssohn’s Lobgesang directed by Maestro Johannes Klumpp, and Beethoven’s 9th Symphony directed by Maestro Andrea Marcon both performances at the Auditorio Manuel de Falla in Granada. Moreover, Hernández participated in the Classical Openair Festival of Winterthur with the mezzo-soprano Vesselina Kasarova, as well as the Festival ao Largo of the Teatro Nacional de São Carlos in Lisbon. Recently, the Canarian tenor has participated in a concert tour in China with the JOCAN, directed by Maestros Víctor Pablo Pérez and Rubén Gimeno. He also offered a recital with operatic repertoire and Spanish song in Tokyo, together with the pianist Julio Alexis Muñoz and another lied recital -where he performed pieces by Schubert and Brahms- in Memmingen, together with the pianist Diana Baker. Airam recently has participated in Mascagni’s Messa di Gloria with the ORCAM conducted by Maestro Víctor Pablo Perez, and in the Opera Gala of the DeutscheAIDS-Stiftung in Bonn.