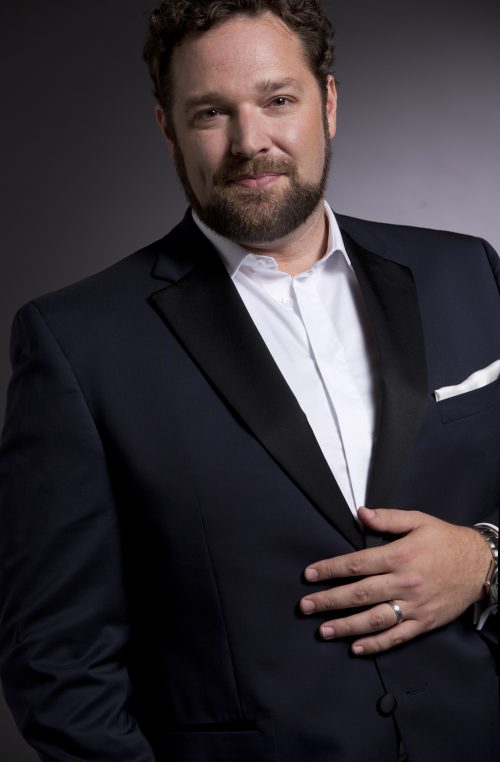 Praised by The New York Times for his “unflagging stamina and impetuous abandon” during his 2012 Metropolitan Opera debut as Énée in Les Troyens, Bryan Hymel went on to be awarded the Metropolitan Opera’s Beverly Sills Artist Award for his achievements in the production. Hailed the Frankfurter Allgemeine Zeitung for his “range of expression and vocal power combined with the subtle art of characterization,” he is also the winner of the 2013 Olivier Award for Outstanding Achievement in Opera for his trio of performances in Les Troyens, Robert le diable, and Rusalka at London’s Royal Opera House. An exclusive recording artist for Warner Classics, his first solo album Héroïque debuted at number 3 on the Billboard Classical Music chart, and earned Hymel the coveted Georges Thill Prize by the Académie Nationale du Disque Lyrique and the Newcomer of the Year Award from ECHO Klassik.

Future plans will see Hymel appear at New Orleans Opera in Madama Butterly, and at Teatro de la Maestranza in Seville in Tosca.

The recent seasons saw Hymel as Rodolfo in La Bohème at Opera Las Palmas. He performed with the London Symphony orchestra in his much lauded portrayal of Faust in Berlioz’s The Damnation of Faust, a role he most recently sang at the Metropolitan Opera as well. He was then seen once more with his frequent collaborators at The Royal Opera House to perform Don José in Carmen and alongside Malin Byström and conductor Maurizio Benini as Henri in Les Vêpres siciliennes. A favorite of the crowds at the Royal Opera House, this proved to be a triumphant return to Covent Garden as Henri after they first produced the five act epic in 2013 to mark Verdi’s bicentenary. He performed at the Bayerische Staatsoper in Munich as Henri in Les Vêpres siciliennes and as Rodolfo in La Bohème alongside his fellow Bohemians, Levente Molnár, and Andrea Borghini. He was Romeo in Bartlett Sher’s production of Gounod’s Romeo and Juliette with the Metropolitan Opera and Rodolfo in La Bohème at the Vienna Staatsoper.

Hymel’s career highlights include debuts and return engagements at the world’s most accomplished opera houses and festivals. Hymel made his Covent Garden debut in 2010 as Don José in Carmen and has since returned for performances in Rusalka, Les Troyens, Robert le diable, Les Vêpres siciliennes and Don Carlo. Hymel made his widely anticipated debut in 2015 at the Opéra National de Paris for performances of La Damnation de Faust, and returned later in La Traviata and for the famed Paris’s Bastille Day celebration concert. He made his Teatro alla Scala debut as Don José in 2010 (later reprising the role with the Canadian Opera Company and in his debut at the Bayerische Staatsoper) and he returned for opening night for performances of B.F. Pinkerton in Madama Butterfly. His Metropolitan Opera debut came in 2012 with Les Troyens, and he returned in subsequent seasons for Madama Butterfly, La Bohème and as Arnold in Rossini’s final opera Guillaume Tell. The new production, staged by Pierre Audi and led by Fabio Luisi, marked the first staging of Guillaume Tell at the Met in over 80 years. He made his house and role debut as Percy in Lyric Opera of Chicago’s staging of Anna Bolena, as well as his San Francisco Opera debut in his renowned rendition of Énée in Les Troyens and his Washington National Opera debut as Don José in Carmen. Additional appearances include debuts with the Vienna Staatsoper and English National Opera in Madama Butterfly; De Nederlandse Opera in Les Troyens; Deutsche Oper Berlin in Rigoletto; Oper Frankfurt in Edgar; Teatro Municipale di Salerno in Robert le Diable; Oper Desden in Der Rosenkavalier; Houston Grand Opera in La Traviata; Santa Fe Opera as the title role in Faust; and his role debut as Arnold in a new production of Rossini’s Guillaume Tell at the Bayerishe Staatsoper.

On the concert stage, Hymel has been seen in Beethoven’s Symphony No. 9 led by Gustavo Dudamel at Milan’s Teatro alla Scala; Verdi’s Requiem with the Rotterdam Philharmonic Orchestra under Music Director Yannick Nézet-Séguin and at the Edinburgh Festival under Donald Runnicles; Walter Braunfels’ Jeanne d’Arc with the Salzburg Festival; a European Tour of La Damnation de Faust with the Orchestre National du Capitole de Toulouse; Roger Waters’ Ça Ira at the Gothenburg Culture Festival and in its US debut with the Nashville Symphony; and in Berlioz’ Requiem with The Netherlands Philharmonic Orchestra and the Orchestre National du Capitole de Toulouse. Hymel debuted with the Jerusalem Symphony in a solo concert conducted by Music Director Frédéric Chaslin. A frequent collaborator with the PKF – Prague Philharmonia, he appeared at the Royal Opera House in Oman for a special New Year’s concert under Music Director Emmanuel Villaume, as well as concerts in Prague’s Smetana Hall and the Théâtre des Champs-Élysées in Paris. He made his debut in recital at London’s Wigmore Hall in 2016.

Hymel studied at the Academy of Vocal Arts in Philadelphia under Bill Schuman and was a participant in San Francisco Opera Center’s Merola Program.