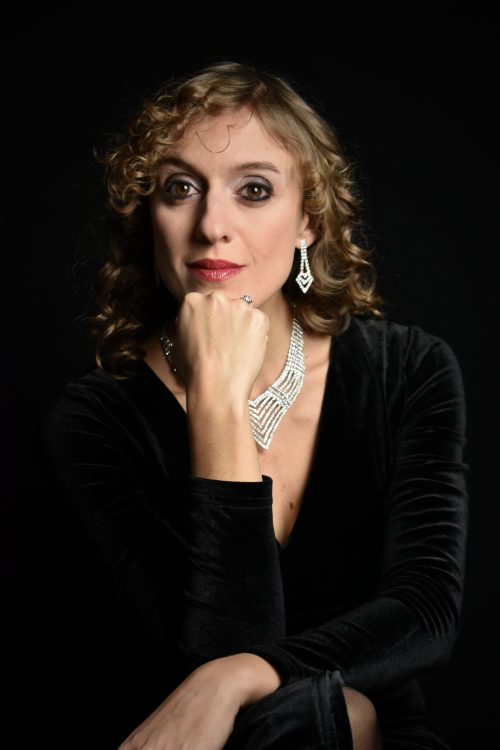 Italian soprano Damiana Mizzi began her musical training at the age of 8, studying piano. She graduated with honours at the Nino Rota Music Conservatory in Monopoli, under the guide of Maria Grazia Pani, and completing her studies with Amelia Felle andMariella Devia.

She participated in Master Classes with Natale De Carolis, Manuela Custer, Stefano Giannini, Domenico Colajanni, Alfonso Antoniozzi, Daniela Barcellona, and she attended the Accademia Rossiniana in Pesaro with Alberto Zedda. She followed classes at the Opera Studio in the Accademia Nazionale di Santa Cecilia of Rome with Renata Scotto, who says that

“She immediately proved to be a prominent element for musicality and vocal style, […] she is a top-notch singer whom I respect and who can certainly achieve excellent results”.

Very active in the world of contemporary music, she performs regularly repertoire of the 20th and 21st centuries by important composers such as M. D’Amico , F. Pennisi, R. Vacca, and world premieres by L. Gregoretti, G. Guaccero and D.Carnini. She collaborated several times with Nuova Consonanza Festival in Rome.

From 2011/12 to 2014/15 she was a singing teacher in the pre-academic courses of the Conservatory of Santa Cecilia in Rome, and she currently teaches singing at the Higher Institute of Musical Studies G. Verdi in Ravenna. She regularly collaborates with various chamber ensembles and she is permanent member of the Hemisphaeria Trio.