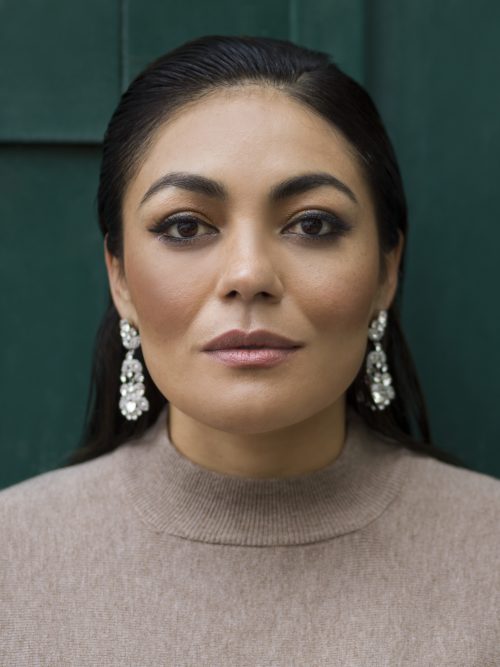 Hailed by the New York Times as “a beautiful woman who commands the stage” and “a major soprano,” Ailyn Pérez is in demand at the world’s leading opera houses and cultural capitals. She has won the 2012 Richard Tucker Award, thereby becoming the first Hispanic recipient in the award’s history. As Opera News observes, “The phrase ‘an embarrassment of riches’ might have been invented to describe the combination of talents that belong to Ailyn Pérez … who truly seems to have it all.”
Notable engagements of the current season include Ailyn’s highly anticipated role debut as Magda in Puccini’s La Rondine at the Teatro del Maggio Musicale Fiorentino, which she reprises in concert with Teatro di San Carlo. Ms. Pérez will star in a new production of Verdi’s Falstaff by Mateja Koležnik at the Bayerische Staatsoper, and she sings her signature role of Mimì (La Bohème) with the Philadelphia Orchestra led by Yannick Nézet-Séguin. In concert, she will be featured as the soprano soloist in Saint-Saëns’ Oratorio de Noël with the Bayerisches Staatsorchester, conducted by Antonello Manacorda, and she sings a selection of arias under the baton of Lorenzo Viotti with the Gulbenkian Orchestra.
Career highlights include Violetta (La Traviata) at Opernhaus Zürich, the Hamburgische Staatsoper, Staatsoper Berlin, Bayerische Staatsoper, San Francisco Opera, Teatro alla Scala, and the Royal Opera House – Covent Garden, where she was hailed as “an ideal Violetta” (Observer, UK). Pérez then went on to appear at Covent Garden in the same season, as the title role in Massenet’s Manon, and for her role debut as Liù (Turandot). Other highlights include Thaïs, Mimì and Musetta (La Bohème), and Juliette (Roméo et Juliette) at the Metropolitan Opera; Adina (L’elisir d’amore) for the Bayerische Staatsoper, Deutsche Oper Berlin, Wiener Staatsoper, and Washington National Opera; Contessa Almaviva (Le nozze di Figaro) for Houston Grand Opera (having made her house debut there as Desdemona (Otello) in 2015); Violetta and title role of Manon on a tour of Japan with the Royal Opera House; Tatyana Bakst in the world premiere of Jake Heggie’s Great Scott (featured on an acclaimed Erato recording release) and Manon for The Dallas Opera; house debuts at the Bolshoi Theatre as Mimì (La Bohème) and at Glyndebourne as Alice Ford; Contessa Almaviva (Le nozze di Figaro) and Marguerite (Faust) for Hamburgische Staatsoper; Marguerite (Faust) in Santa Fe and Amelia Grimaldi Simon Boccanegra at Teatro alla Scala and Staatsoper Berlin, and also opposite Leo Nucci at Opernhaus Zürich.
In concert, Ms. Pérez has performed Verdi’s Requiem with the Orchestre Métropolitain in Montréal conducted by Yannick Nézet-Séguin, Mozart’s Requiem with Antonio Pappano and the Accademia Santa Cecilia Orchestra in Rome, and Mahler’s Symphony No. 2 with Essen Philharmoniker. In recent seasons, Ailyn has made guest appearances at gala concerts for the Metropolitan Opera and the Royal Opera House. Ailyn has also appeared in recital for London’s Rosenblatt Recitals at Wigmore Hall, Philadelphia’s Kimmel Center, and with the Santa Fe Desert Chorale. Her debut album, “Poème d’un jour” (a program of French and Italian songs on
the Opus Arte label) was released to rave reviews, with the UK’s Independent newspaper awarding it five stars, while International Record Review confessed, “Every so often, a singer comes along who completely bowls you over.”
During her triumphant 2019/20 season, Ailyn starred as Nedda in Robert Carsen’s new production of Leoncavallo’s Pagliacci at the Dutch National Opera. She returned to the Bayerische Staatsoper as Violetta in Verdi’s La Traviata, and to the Metropolitan Opera for her signature role of Mimì in Puccini’s La Bohème, where the New York Times praised her “melting sound and affecting vulnerability.” She began the new year with her highly anticipated debut as Antonia from Offenbach’s Les Contes d’Hoffmann at the Opéra national de Paris, receiving critical acclaim from Forum Opéra for her “deeply moving Antonia … From start to finish, she delivers a delicate and subtle song with impeccable pronunciation.” She concluded the season in the title role of Manon at Wiener Staatsoper, and Desdemona in Verdi’s final tragic masterpiece Otello at Staatsoper Hamburg.
A highlight of last season also included the release of her new digital album, Mi Corazón, with Chinese guitarist Xuefei Yang, exclusively on Apple Music and iTunes. The album is a heartfelt celebration of Ailyn’s vibrant and music-filled heritage, featuring much-loved Spanish and Portuguese songs, as well as songs by Manuel de Falla, Manuel Ponce, and Heitor Villa-Lobos.
Ailyn Pérez is a graduate of Philadelphia’s Academy of Vocal Arts and Indiana University. Her many accolades include the George London Foundation’s Leonie Rysanek Award, Shoshana Foundation Career Grant 2007, 2nd place in the 2006 Operalia Competition, and honors from the Loren L. Zachary Foundation, Opera Index, and the Licia Albanese-Puccini Foundation.