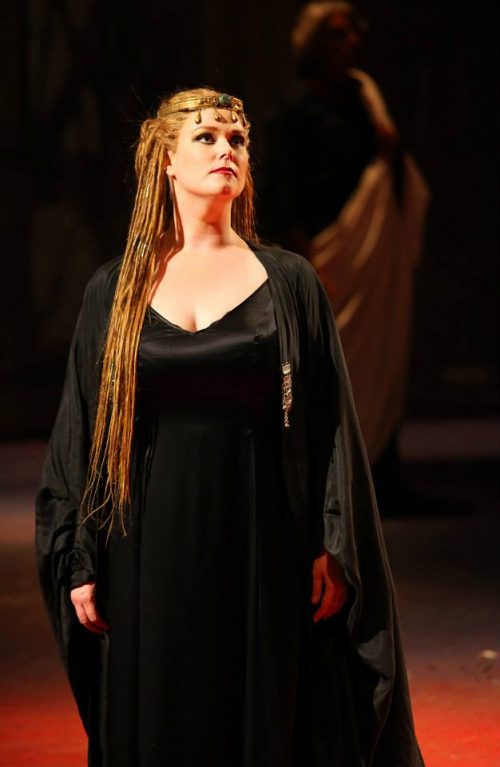 Jessica has a repertoire of over 30 different roles of which the most popular is Lucia Ashton from Gaetano Donizetti’s Lucia di Lammermoor which she has performed in over 27 productions followed by Amina from Vincenzo Bellini’s La Sonnambula and Elvira from I Puritani by the same composer. She also specializes in Rossini repertoire, being a frequent guest of the Rossini Opera Festival in Pesaro, Jessica has so far taken to the stage in 12 Rossinian roles including the title roles of Semiramide, Armida, Adelaide di Borgogna, most recently Desdemona in Otello at the Gran Teatre de Liceu Barcelona and Rosina in Barbiere di Siviglia in Arena di Verona.

Her next engagements include her return to Metropolitan in New York in Cinderella, I puritani at Abao Olbe, La Sonnambula in concert form at Teatro di San Carlo.

Another composer with whom Jessica is particularity suited is Gaetano Donizetti. Jessica made her debut at La Scala with La Prima Donna in Convenienze ed Inconvenienze Teatrali and later returned to perform in the title role of Lucia di Lammermoor. This last season she added four new Donizetti titles to her repertoire; La Fille du Regiment with Opera Las Palmas, Don Pasquale with ABAO in Bilbao, L’elisir d’amore with the Gran Theatre Liceu in Barcelona and the title role of Rosmonda d’Ingliterra in concert form for Opera di Firenze and then staged and filmed for a DVD with the Donizetti Festival in Bergamo where she has been invited this season to be the artist in residence and will be performing in a gala concert and in the title role of Elisabetta in Castello di Kenilworth.
Her discography includes CD recordings of Rossini’s Otello, Vaccai’s La sposa di Messina, Donizetti’s Rosmonda d’Inghilterra, Verdi’s Giovanna d’Arco and she is featured on “Belcanto Bully” by Naxos.  DVD/Blu-Ray recordings include  Giovanna d’Arco  from the Festival Valle d’Itria, Adelaide di Borgogna, Ciro in Babilonia and Aureliano in Palmira from the Rossini Opera Festival, the 2012 “New Year’s Gala Concert” and Bellini’s La sonnambula from Teatro La Fenice in Venice, Donizetti’s Rosmonda d’Inghilterra from the Festival Donizetti of Bergamo and Le Convenienze ed Inconvenienze Teatrali from Teatro alla Scala in Milan. In 2016 her first solo album “Serenade” was released by Opus Arte. Upcoming releases include a DVD of Ronconi’s Lucia di Lammermoor with Teatro dell’Opera di Roma, conducted by Roberto Abbado and an album of belcanto madscenes with the Florence Opera and Chorus under the direction of Maestro Fabio Luisi.