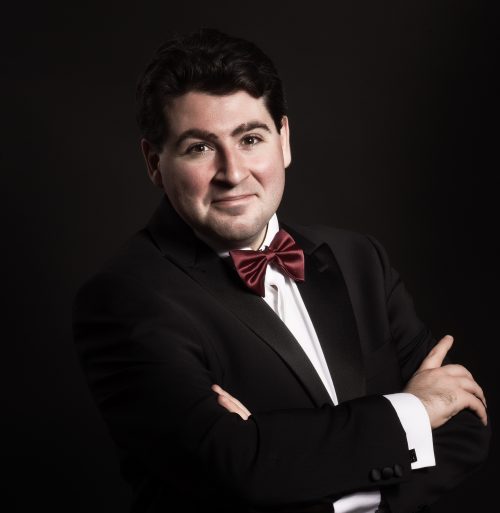 The Milanese bass-baritone Giovanni Romeo is one of the youngest Italian talents who have establishing themselves on the most important opera stages worldwide, such as Teatro alla Scala, Bolshoi Theatre, Atlanta Opera, Opéra de Monte-Carlo, Deutsche Oper in Berlin, NCPA in Beijing, ABAO Olbe in Bilbao, Royal Opera House Muscat, and many others.

He began his studies in opera singing at the age of fifteen with soprano Cristina Dominguez, and he improved his skills at the Teatro alla Scala Academy, thanks to the special “Paolo Montarsolo” scholarship.

He began his career with the “Laboratorio lirico del 700” at the Bibiena Theatre in Mantua debuting as Uberto in Paisiello’s La Serva Padrona and as Geronimo in Cimarosa’s Il Matrimonio Segreto, under the direction of the famous comic bass Enzo Dara, with whom he specialized in comic roles; many consider him as his artistic heir.

Afterwards, he debuted many Mozart and Donizetti roles, both as bass and as baritone buffo, thanks to his vocal extension and flexibility. He took part in some of the most important international opera projects for young singers such as the “Young Singer Project” in Salzburg.

But the real success for came with Dr. Bartolo from Rossini’s Il Barbiere di Siviglia; a role that Giovanni Romeo has played many times (over 60 official performances) and that has led him to perform on the major opera houses in Italy and abroad. Among these, Jean Pierre Ponnelle’s famed production at Teatro alla Scala, in which he joined Leo Nucci and Ruggero Raimondi.

Among his signature funny roles, Don Magnifico in La Cenerentola, the title role in Don Pasquale, and Dr. Dulcamara in L’Elisir d’Amore. But his vocal and dramatic versatility ranges as far Schaunard in Puccini’s La Bohème and Sancho Panza in Massenet’s Don Quichotte.

Most recently, he debuted as Prosdocimo Il turco in Italia at Opéra de Monte-Carlo, with Cecilia Bartoli.